Fred Wilson has posted a few times about arrogance & ego. He’s mentioned that some folks find him arrogant, which is far from the impression I get from his blog. What I see is competence derived from experience.

But I’ve noticed in my own career that there are plenty of folks who confuse knowing something from experience with arrogance. When you’ve experienced a problem or set of circumstances before, you’ll have a clear idea of what did or didn’t work last time around. It’s easy for your own “oh, that’s obvious” moment to come across as arrogance…

Some of the blame doubtless lies with me — I’m not known for being tactful when something needs to be said. Generally I err on the side of blunt as it’s how I prefer to be treated. So I might state something as a fact, or simply act based on the information at hand based on prior experience. And that doesn’t sit well with everyone.

But I have three nifty items to keep it under control, one of which has come up a few times lately so I thought I’d share.

Exhibit A: I have a Producer credit on a PS2 Video Game, but…

During my career, I’ve worked on some interesting projects… some of which I am very proud of (an A&E documentary, a Christmas special for ABC Family among others).

Reminding myself of the latter less-than-impressive projects is a great way to keep perspective. 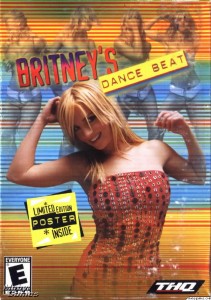 Yeah… Britney’s Dance Beat. That Britney. Oh boy. In my defense, I was only a producer for the animated cut scenes — the rest of it was not my fault. But still, it’s not something I’m proud of. At least she still had a career back then.

Exhibit B: I have a credit on an album, but…

This one requires a bit more explanation. Back in High School, there was a period when we were “encouraged” to go get an internship at a real job. I couldn’t see the point in getting a real job, especially since (a) I was planning on going to college and (b) I could presumably get a real job at some point in the future. At the time, I was an avid musician, so I called every recording studio in town until I found one that would take me on as an intern. The owners of the studio I worked at were putting together their own album and I ended up doing some audio engineering work on it (very minor stuff like “okay, press record now”). They were gracious enough to give me a credit on the LP when it was released. So I have my name on the sleeve notes of a vinyl LP. And that is incredibly cool.

Unfortunately, the album pretty much sucked. The only reference I could find online gave it a 2 out of 5.

So while they sound neat in principal, both of those trophies are humbling in the ego department 🙂

My third check and balance is my personal favorite: my ever supportive and ever bluntly truthful wife. She does a fantastic job of walking the line between encouragement and realism, telling me like it is when I need to hear it most. And unlike my other two ego checks, I’m always proud to have her with me.