Brad Feld is apparently very fond of asking “What do you suck at?”, a topic he’s blogged about on a few different occasions.  I thought I’d make a contribution.

Exhibit A – Pride Comes Before A Fall

Since I now own a house with some land around it (compared to Phoenix) and things can theoretically grow well here, I’ve been trying a feeble hand at growing some veggies.

And that is a pepper I grew all by myself (with some help from my father in law).  I tried growing three plants and only one actually flowered, but it was the Little Pepper That Could.

I was so proud.

Exhibit B – The Suck

One storm and 24 hours of not-paying-attention later… 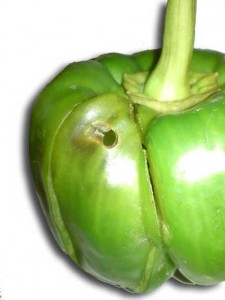 Doh.  I tried to take a picture of the nasty creepy crawly that was inside my prized pepper, but it just didn’t come out well.  I seriously considered eating the Pepper anyway, but my smarter-than-me wife talked me out of it (thanks!).

So yeah, despite my relatively determined efforts, I really suck at gardening…

← Ego, Arrogance, Checks & Balances…
Lifestyle vs VC: is it really keeping your soul vs making a profit? →