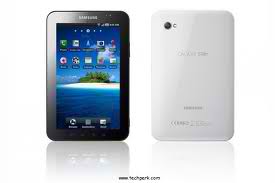 I’ve spent the past couple of days with a T-Mobile variant of the new Samsung Galaxy Tablet. To cut right to it, I’m pretty impressed.

The key with this device, like the iPad and the super-sized Smartphones that are coming out now, is what you intend to use it for. And for me, it has a lot of promise. The phrase “for me” occurs a lot in this post because that really is the critical point. The Galaxy has had some very mixed reviews, and frankly it reminds me of the negative reviews many netbooks get. This is not a desktop/laptop replacement, but for certain use cases, it works very very well.

My primary phone is trusty Nexus One. I’m all-cloud these days, so Google has my contacts, email etc, and Google Maps has replaced whatever little sense of direction I had. As a phone, it’s great. As a “mobile companion” to keep me organized, also great. I don’t play much music on it, but it’s an okay media player (although better at photos and video). And yes, it’s nice to have a pocket device that runs flash.

But there are some issues. Battery life is a constant concern. Emails are generally kept short and I don’t author documents. Just too much like hard work.

And for me, that’s where the Samsung shines. As a portable “more than a phone, less than a laptop” device. Yes, I know that’s what the iPad is supposed to be. But for me, the iPad is a little on the large size. The Samsung isn’t pocket sized (unless you have ungodly big pockets), but it is pretty light and small compared to the iPad. I wouldn’t leave the iPad in the car unless I put it in the trunk, but the Galaxy is small enough to fit in a glove compartment or side pocket. It also weighs less than a pound, so it is much more like carrying a notepad (yes, a paper one).

Aesthetically there’s not much to say. It’s a black rectangle with rounded corners. Yay. 7” screen, front and rear facing cameras (but no Skype support for video calls yet), stupid Apple-esque connector, and volume/power buttons. It’s also running Samsung’s Android UI, which is a bit of a mixed bag, but overall has some nice touches. The device runs Android 2.2, supports Flash out of the box and has built in 3G.

The Android status tray has been modified to include easy switches for Wi-Fi, Bluetooth, GPS, Silent mode and Orientation lock. The latter is especially handy as you don’t need to fumble around for a physical switch to lock the device in portrait or landscape. There’s also a brightness control, although the auto mode does a decent job.

The screen is very bright and clear. Good color and decent readability under most lighting conditions.

But back to what I use it for… Yesterday I was on a 4 hour flight that happened to have in-flight wi-fi. I was able to take care of a bunch of emails, send some urgent SMSs via Google Voice, author a couple of Word docs, sketch out a Powerpoint, remote log in to my webhosting company and set up a test Drupal server (not a fan, but that’s another post), all while listening to music.

The flight was packed full and the guy next to me was trying to do the duck-typing thing on his laptop (elbows in, repetitive strain injury at the ready). Before his Thinkpad had even finished booting, I was already finishing some tasks. When we had to put our toys away, I still had 60%+ of battery left.

Apps are generally responsive. I haven’t had many issues with the browser. My only app-related issue is how much pre-installed junk is on the device. I really wish manufacturers wouldn’t do this. Or at least let me uninstall the cr*p I really don’t want. It seems the good old days of Desktop Bloatware are back with a vengeance.

There are some rough edges. The auto-correct doesn’t always recognize password fields, which can make typing in passwords a nightmare. Not to mention that your password appears big and bold in the suggested word panel as you type. There aren’t many good tablet apps yet, although some apps already look good (like Angry Birds). We really need an equivalent of Mujinote for this device. Also, with such a big screen, the text size is simply way too big in many apps. For example, in Gmail, you can shrink the size of the message text, but not the list of messages in your inbox. You could fit a lot more readable stuff on the screen if the font size was smaller.

I also really wish Samsung hadn’t gone the Apple route of proprietary flimsy connector and sealed battery. I don’t care about replacing the battery, but I do care about recovering from a completely locked up device. The latter hasn’t happened yet, but I’m not sure how you recover if it does.

But all in all, for me, it’s a handy device that means I take my laptop to even fewer places, and that’s a win in my book.

← We Pad, You Pad, Not Sure I like the iPad…
“Hi, My Name is Zerista and I’d like to blow a golden opportunity” →