I spent much of the past week at the excellent Defrag Conference. I honestly don’t know another conference where you’ll find meaningful discussion of traveling to space, solving big data problems and why rooms in Vegas have mirrors on the ceiling (Esther Dyson, Jeff Jonas and Jeff Ma respectively).

The conference is attended by some very smart and influential people (present company excluded), from senior execs to talented developers, press and VCs.

Defrag is organized by the talented Eric Norlin and his equally talented wife Kim. Eric gets startups and every year I’ve attended Defrag (3 now) he does one thing that I think is great: he gives a startup a shot at the brass ring.

How to connect with people at a conference when you don’t know them but have common interests is a poorly solved problem. This year, Eric gave Zerista a shot at solving it.

And boy, did they suck. There’s a big suck and then a bunch of smaller quibbly sucks that you could argue may just be me. But the big one is a doozy.

I arrived in Denver on Tuesday night (November 16th) and got an email asking me to sign up for Zerista: 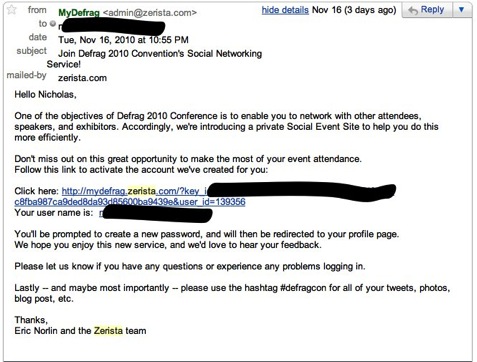 So I signed up and started creating my profile. When I tried to add a photo, the system belched. I tried a few more times and got nowhere. I’m running a Mac and Chrome browser. Its not exactly an unusual combination but I have seen problems on some sites, so I fired up Firefox. Different error message but the same end result: no ability to upload a photo. On a scale of 1 to 10, being able to have an easy way to recognize someone you’ve never met (like a photo) ranks at least a 12, so I was keen to solve this.

Investigative hat on, I took a look at the Zerista site and they mention that “Zerista Pro is a Mobile and Desktop Event Planner that turns your event into an interactive mobile experience for all stakeholders”.

Aha! Perhaps I can use their mobile app.

Err no. Neither my Nexus One nor my Galaxy tablet can see anything other than a hobbled mobile UI that doesn’t let you edit information at all.

But then another idea hits me. This is a startup. This conference is a big deal for them. They are probably all working 24/7. Yes, it’s 11pm at night (Colorado time) but why not send an email to their support team! I’d never bother with a mainstream product because we all know how that works out, but good startups (and Eric knows what those look like) are all over customer support.

So I did. Short and simple as you see below. I used to run a Customer Support department, so I tried to provide at least a minimum amount of useful information and a clear subject.

After sending that, I went to bed. Defrag started at 8am on the 17th and I was on East Coast time, so I was up early.

I checked my email, but there was no response. Not even an autoresponder saying “We got your email”.

The 17th came and went. I checked the mobile app a few times, but it seemed no one was really using it and the vast majority of attendees didn’t have a completed profile or profile picture. The 18th came and went too. Defrag is only a two day conference, so by 5pm or so on the 18th it was over.

Caught up with my email late last night when I finally got home.

This morning (Saturday) I got up late to see not one but two emails:

Uhhh, what? I already registered. I logged in several times during the conference. Why are you sending me this now? As I look at this more closely, it seems Redmine is perhaps their support ticket system, so this is perhaps a login for problem tracking, not my account login?

This email was followed by an even more splendid one: 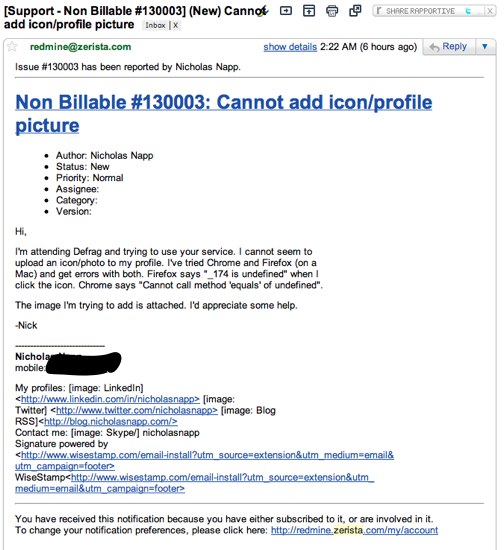 So yes, I got a message that simply regurgitated the email I had sent 3+ days earlier. You’ll also see the heartwarming “NON BILLABLE” notice in the subject line.

Now I already had the impression that they didn’t give a shit about my business, but at least now I know it’s because I’ve been identified as some kind of freeloader by their system.

You’ll also see that it shows the issue as “New”, which after 3+ days I would argue with, and the priority as “Normal”. Since the conference ended two days ago, I’d recommend they change that to “Low”, or “Ooops”, or “My Bad”.

Seriously? WTF! I couldn’t help but respond, since no-one else seems to be updating my case: 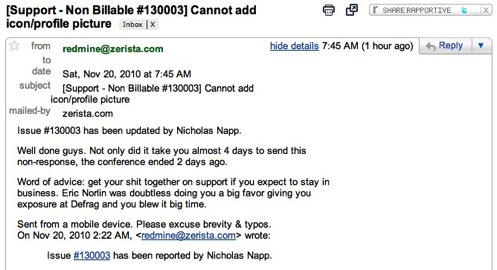 If you can’t handle simple tasks like responding to urgent support emails, you don’t deserve anyone’s business, let alone mine.

← A Galaxy Far, Far Away — first few days with a Samsung Tablet
Hubba Hubba… No, really, this is a practical business post… →